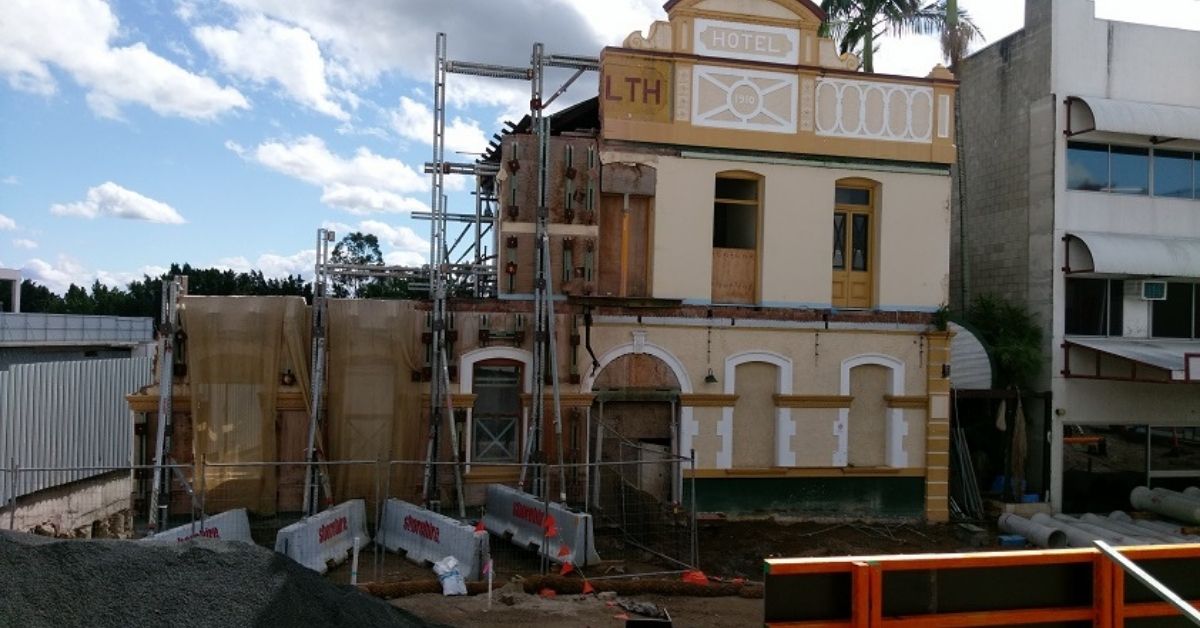 The Commonwealth Hotel in Union Plaza at the Ipswich CBD is going to rise and open again as the rebuilding of its century-old brick walls is underway. Following months of deconstruction and stabilisation, Built Qld Pty Ltd is putting back and bonding some 20,000 refurbished bricks as part of the restoration of this historic site.

This specific reconstruction work will take at least a month to complete, according to Ipswich Central Redevelopment Committee chair Councillor Marnie Doyle. However, the full reconstruction of the hotel will entail at least 23 weeks.

“The hotel was taken apart piece by piece and materials stored in a council warehouse ahead of reconstruction,” Ms Doyle said. “Original bricks have been preserved and new ones carefully chosen as the construction process blends old with new.”

“The reconstruction is being overseen by renowned local architect and heritage expert Peter Johnston as well as the project’s engineers, as they carefully put the old pieces back together.”

Read: Springfield Rolls Out Plans to be the World’s Greenest City by 2038

Also known as the old Murphy’s Town Pub, Commonwealth Hotel’s facade had been uninhabitable due to large cracks and deterioration.

In July, the Council pulled funding for its reconstruction from the $250 million CBD redevelopment.

The Commonwealth Hotel is the only 1910 structure to remain standing amidst the establishment of shopping centres all around the site in the 1980s.

“We have lost so many significant heritage and historical buildings that were victims of the 80s; many beautiful buildings were just bulldozed and replaced with modern structures that are now outdated,” Ms Doyle said. “I think this is one important win we need in Ipswich to preserve some of our history.”

Meanwhile, prospective tenants have informed the Council of their interest to reopen the hotel/bar once the building is ready for occupancy.