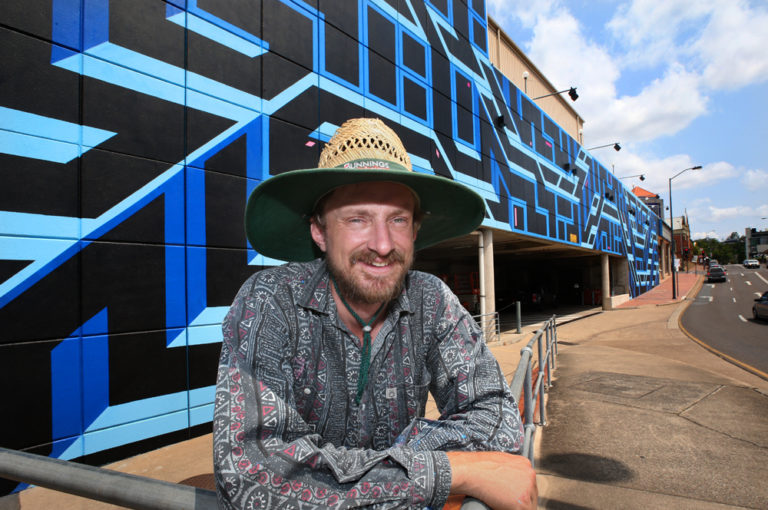 A colourful new mural is now on display in Ellenborough Street in Ipswich. The wall, previously covered with faded pictures of Hollywood movie stars, has been  transformed into a vibrant piece of art with its retro-futuristic theme.

Mr Songialo’s design is “retro future,” which according to him was inspired by all the ‘80s clothes and surf wear his mum never bought him when he was young. This design is considered one of a kind in South East Queensland.

The mural, being the first of the three public arts planned for CBD, is part of the Public Art Strategy and Plan for the Nicholas St redevelopment. It revolves around the theme “Shine,” which symbolizes the growth and evolution of Ipswich’s history and culture, reflecting on the journey of change and development over time.

The second mural will be painted at 143 Brisbane Street, a building at the top of Nicholas Street owned by Council. Presently, they are still developing the concept for this mural. The third is in the arts selection phase, but it will be an Indigenous mural.

Ipswich City Council Acting Chief Executive Officer Sean Madigan revealed that the three murals are just the beginning of the public art being planned in CBD. Locals can expect more large scale murals to be located in a prominent position in the civic space adjacent to the new Council administration building.

Council wanted to bring life to spaces that are currently unused. They will also come up with workshops during the Brisbane Street Art Festival, so residents will have opportunities to be involved.

For more information about the project visit the Ipswich First website.

Read: Ipswich Is Set to be Home of Queensland’s New Office for Veterans