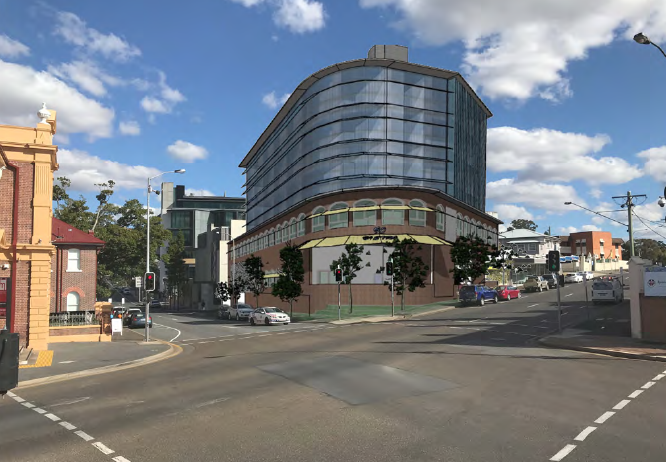 Ipswich City Council has given the green light to transform a block on the corner of Limestone and Ellenborough streets into a multi-use six-storey commercial tower.

The 1,189 sqm development at 90 Limestone Street will feature a restaurant/bistro and small shop on the first floor and commercial offices in the remainder of the building. It will also have 42 car spaces over two levels, 29 of which are on the basement and the 13 others on the first floor.

Whilst the approved development exceeds the three-storey height limit for the site, it is considered a ‘landmark’ site due to its location.

“The height of the proposal has been assessed, taking into consideration the nearby courthouse development (7 storeys), and the significant view corridors present through this location,” Baird & Hayes Surveyors and Town Planners noted in the report on behalf of The Ernst Pfister Superfund.

The application also mentioned that the prominent trees within the 88 Limestone Street property, on the Ellenborough Street alignment known to be white fig will not be impacted by the development. These trees are approximately 120 years old and play a significant role in the established character of Ipswich.

“The intention or objective for the Ipswich CBD area is for it to remain as the administrative and cultural centre for the Western Corridor of SEQ, as well as act as the main retail and commercial centre for Ipswich’s centre, western suburbs and surrounding rural areas,” Baird & Hayes noted.

Construction of the new building will commence after the demolition of the existing structure (currently an Autobarn retailer and Tattoo Studio).

Further information about this approved development can be viewed at MCU – 6645 / 2019.